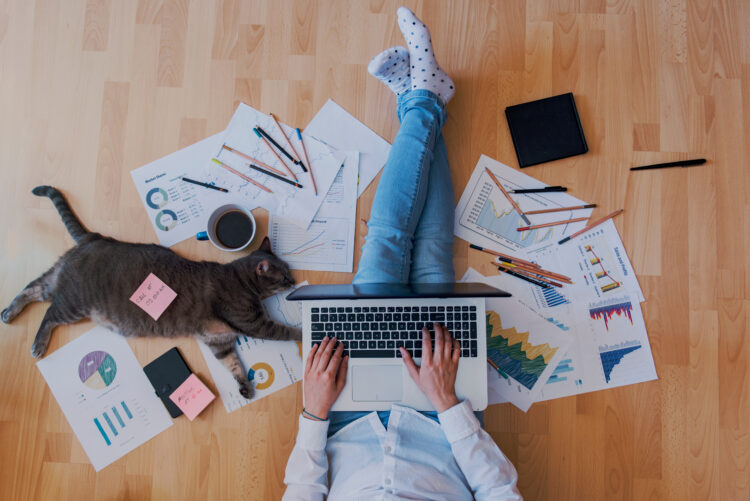 In 1930, one of the most important economists of the 20th century, John Maynard Keynes, gave a lecture entitled “Economic Possibilities for our Grandchildren”. In this lecture he explained that in 2030, the biggest challenge facing society will be the question of what people should do with all their spare time.

Yes, you read it right. Keynes was convinced that within 100 years, the Western standard of living would rise so enormously that the world of work would be a completely different one. Hard to imagine, considering that full-time employees in Europe on average work around 41 hours a week. Moreover, new and more flexible forms of work, such as home office, are only experiencing a boost after the lockdown forced by the Corona crisis.

Now this blog has been created with the aim of finding solutions for how to make our world and our societal system more sustainable. In some areas, these solutions already seem to be clearly formulated and tangible. States and cities, for example, have set themselves goals for a shift in energy supply, away from fossil fuels and towards renewable energies. Regarding transport policies, the aims are to reduce greenhouse gases through new means and ways of transportation.

But what does a sustainable working model look like? How do we actually want to work in the future? And what does Keynes‘ consideration have to do with this?

“The way we have approached the labour market has always been about making progress: creating more safety, having better benefits, less working hours, more time for yourself”, explains Kim van Sparrentak, Member of the European Parliament and member of the Committee on Employment and Social Affairs.

In fact, since the founding of the trade unions, the reduction of working time has always been one of their main demands – with success. Since 1870, the average working week has fallen from 65 to 40 hours within 100 years. However, in recent years this trend has slowed down, stagnated and in some countries even reversed.

„For some reason, after all the decades we have fought for less working hours, now we’re just saying, ‚oh it’s okay now‘. Even the newest jobs in the labour market, such as in the platform economy or for delivery services, are not much better from a social point of view than a 100 years ago, with low or no social benefits and earnings per delivery“, says the MEP. „I think we really need a new discussion about the future of work, instead of going backwards. And a shorter working week is definitely part of it.“

The many experiments that are still being conducted around the world about reducing working hours show, that this is not a topic of the past (some of them being explained here). After all, there is a lot of potential for solutions: in the fight against climate change, for more equality, health, productivity and jobs. So why don’t we try it out?

Not only the way we work, but also how we work has changed constantly and will continue to do so. In times of climate and biodiversity crisis this is perhaps even more relevant than ever. „There are jobs that are not worthwhile, neither for the person that is doing the job, nor for society as a whole,“ says van Sparrentak.

It is therefore even more important now to create secure, well-paid and sustainable jobs. „We have to be honest that at some point, we can’t have as many people working in aviation or in coal mines. But while being honest about that, we also have to make sure that there are schemes for them to change their jobs and to get reskilling or an early pension.“

The “European Globalisation Adjustment Fund” will now be redirected to provide greater support for reskilling, while at the same time creating a framework in which people have the opportunity to benefit from such educational schemes, whether by providing childcare for parents or reimbursement of travel costs to and from school.

At the same time, we must put a stronger focus on those professions that are valuable to our society and to our environment. “All the nurses that are standing on the frontline now and who are suddenly being appreciated haven’t been valued for many years, also financially meaning”, says the MEP.

The question to be asked is: what is more important to us? The value that a profession has for our economy, or for our society? And why do we actually have to choose between the two? Why is it still more beneficial to become a banker than a nurse?

The same holds true for unpaid care work, i.e. the activities of caring and looking after children, relatives, or the partner. These activities make a significant contribution to the economy and to individual and social well-being. Because in a society in which no one cares for others would not be able to function.

16.4 billion hours are spent in unpaid care work every day. Were such services to be valued on the basis of an hourly minimum wage, they would amount to 9 per cent of global GDP. But in fact, they don’t, because these services are unpaid – and that’s okay. However (and unfortunately) political decisions often only take into account those activities that can be expressed in terms of profits for the economy. And that’s the core of the problem.

In addition, women do the bulk of care work – in the EU three times as many as men – and thus usually have to cut back on the labour market. Whether it is because women work part-time to reconcile family and work, or because they have lower salaries or less chances of taking up positions of responsibility due to “gaps” in their CVs.

The good news is that there are many ways to change this. Reducing working hours is one of them. Recognizing care work as an integral part of our economy means that we realize that we are not only working at our workplace, but also at home. Working less could not only reduce the strain on human health and well-being, but for some people (mainly women) it could also mean that they no longer have to choose between career and family.

Social security must also be a key focus of a sustainable and future-proof working model. The movement of yellow vests in France has clearly shown that social justice and ecological sustainability cannot be separated. Sustainability must not just be a luxury for people with high salaries.

Nor will the (health) consequences of climate change and environmental pollution affect all sections of the population equally. New forms of social protection are thus urgently needed. This already starts with the fact that people who have a job should earn enough money to live from it. “That’s my biggest wish”, says van Sparrentak, “that if you have a job, you can afford a roof over your head, to buy food and a basic security in case you fall ill.”

But an employment contract should not be the only way to ensure social security. “We have to make sure that social security is not based on whether you have a job or not, in a way that you always have something to fall back on in case you lose your job”, says the MEP.

Van Sparrentak is convinced, that this will be the great change in the narrative regarding our social and labor policies in the coming years. “I think the main thing that is changing in the narrative now is seeing if we can really detach the job and the social security. And certainly, the universal basic income will also be an issue. Although I’m not the person saying that we have to implement it now, I think that there are many interesting discussions out there right now and I do think that this is the moment to do huge experiments with it to see what its effects are.”

Another try for change

This article is characterized by possibilities, discussions and experiments surrounding our working world. Because yes, there is not this one path to a sustainable working model. Social responsibility, ecological economic models, gender equality, compatibility of family and work, health and safety at work – the number of interlinkages and combinations of different circumstances is huge.

“No one has the answer on how we can make things better. But there are a lot of ideas in the world and this is the time where we can actually try out these ideas”, says the MEP. Before we know it, the moment of change has arrived.

Is the corona crisis our moment of change? “No doubt things are going to change, the working conditions for people are going to be safer and healthier. People are so aware now of the importance of health, I can’t believe that this is just going to pass” says Kim van Sparrentak.

What we know is, that continuing as before will not be the solution. “We’re living in a society that is always running behind schedule because we have put so high targets and are going so fast and are exhausting our planet. In general, if we want to stop climate change we also have to take a step back and be a bit more relaxed in the way we function in society.”

And if no one’s calling for it, then it’s never going to happen. So, here’s another try.